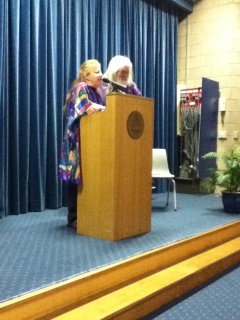 World famous detective Phryne Fisher came to Bendigo thisweek but there was no crime to be solved by this 1920’s heroine as she was noton a sleuthing mission.
Actually it was author Kerry Greenwood who was visiting ourtown talking about her famous protagonist as well as her love of history andlife as a an author. Ms Greenwood gave those lucky enough to be at the CampbellTheatrette an enthralling talk about her life as an author, lover of historyand solicitor for legal aid (where they attempt to get justice for most).
Fans of the Phryne Fisher series will know that Greenwood’sattention to detail is immense and the Melbourne scene in the 1920’s comesalive to the reader as the crime story is unveiled.
In the time allotted of an hour, Greenwood packed in much aswell as introducing her wizard friend David Greagg and his latest book about cats,of which he also gave a reading. The couple share their home with several catsand Greenwood attributes her health to the cat Belladonna which won’t allow herto sit at the computer writing for too long. Prior to the cat’s interventionGreenwood would type from one dawn to another dawn and subsequently sufferedfrom carpal tunnel problems.
Some of the comments and information Greenwood made that Ijotted down from the night…
You can get drunk onwords.
[She]Wrote her first book of 100,000 words was inspired byTolkien (of which the public will neversee it) whilst sitting up in the apricot tree of her family home and lookingafter her younger siblings.
[Her] Tips for new writers (or any others new to novelwriting). Do not try to fix the first chapter before the whole novel iswritten, Books have their own life, thestory has to be told.
I’ve never had writer’sblock.
The Government yearbook is a wonderful source for historical research.
Greenwood enlisted the help of her mother whilst researchingfor her books and subsequently got her mother hooked on history. Greenwood’s passionfor historical research is motivated by her need to get the facts correct I have to get it right.
Deciding on writing about Phryne Fisher in 1928 happenedwhen Greenwood was nearly 30 and she wanted to get published. After beingrejected with some of her work Greenwood was approached by publishers Mc Fee Gribbleand while they didn’t like the story she had shown them asked her to write a 2book series about a detective. The setting of 1928 was brought about in acomplex way which included her father being a wharfie and knowing some oldwharfies who had lived through that time of the 1928 -1929 wharfie strikes.Greenwood met these two chaps and loved their rhyming slang and readers willrecognise their legacy in her Fisher books.
The name of Phryne (named after a Greek courtesan who comeswith her one legal story)  was a popularone in the year of 1900 when she was born, and seems fitting given Greenwood’slove of the Greek language which harks back to her Greek lifelong friend whoshe met at the age of 5 ½.
Fans of the detective will be delighted to know that after20 years of Greenwood being approached to make a series about her there is atlong last one being made, and it is Essie Davis (from the Slap) who has beenselected by Ms Greenwood to play Phryne. The delay of a series being made aboutthis extraordinary female detective was due to Greenwood insisting she be ableto vet the scripts and she was to choose Phryne. At the audition Davis came inand displayed the right arrogance and persona for the part, as well she is not tooyoung, as Greenwood explained a woman in 1928 who was 28 was considered to be muchmore mature than a 28 year woman of today.
Personal note:
I was delighted to know that as Ms Greenwood was signing mycopy of The Long Walk, a children’snovel set in the depression years when the Great Ocean Road was beingconstructed, the picture on the front cover was actually that of Greenwood andher family.
For more information about Phryne Fisher go to: http://www.phrynefisher.com
You will find a link there for Kerry Greenwood information,which is great because she is an author of 58 novels and 5 non-fiction books,not all about Ms Fisher.
I’m glad I brought along my 4 copies of Greenwood’s booksand then was able to buy another directly from the author, Media, but was disappointed that she was not represented by any ofthe local bookshops in town where I may have been able to add even more signedcopies to my collection.