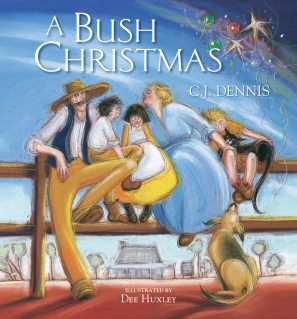 ABush Christmas, C.J. Dennis, illustrated by Dee Huxley,black dog books, ISBN 9781742032078, (2011) paperback, $16.95.
This exquisitely illustrated version of Dennis’ iconicAustralian poem, (first published in the Herald newspaper 24th December1931[1])is a reprint of the Huxley’s book from 2008 and is out just in time forChristmas 2011.
It is the one day of the year when old Rogan comes to share the Christmasmeal with the mother, father and the children. Set in an Australian rural settingon a typical hot summer day, where “Itaint a day for workin’ hard,” says Dad even though conversely Mum is veryhot and busy in the kitchen.
The traditional English-inspired meal, turkey,vegies and plum pudding, once served allows all family members to sit back andlisten to Rogan’s yarns from the past until it is time as the sun slants redly thro’ the gums for him to ride back to hislife of solitude for another year or so.
Huxley’s closing illustration is a clever reminderof how life has (hopefully) changed since Dennis’ poem was first printed.
A lovely book for all Australians.
[1] “C.J.Dennis”
Herald, 24 December 1931, p4, http://www.middlemiss.org/lit/authors/denniscj/newspapers/herald/1931/works/bushchristmas.html
Accessed 30th November 2011.