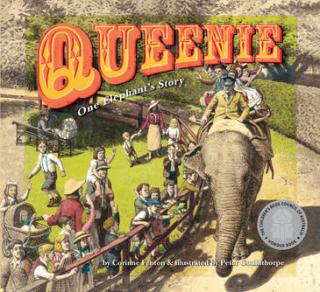 Queenie:One Elephant’s Story. Corinne Fenton, ill. Peter Gouldthorpe. ISBN 9781742032153(2012) paperback, $16.95, Walker Books.
This book (reprinted from the 2006 edition) is based on the real life story of an elephantwho was born in India toward the very end of the 19th century, wascaught when… the hunters found herand  shipped to Australia to live her days in theMelbourne zoo. At the zoo Queenie, as the young elephant was named, begins herlife taking visitors on rides aboard her huge back around the pathways of thezoo.
Queenie even tookpart in a procession in the main streets of Melbourne in 1934.
Fenton tells Queenie’s story compassionately and withoutjudgement, as she explains:
“Four and a half yearsearlier I had come across Queenie quite by accident while I was researching foranother book. I remember the exactmoment and the feeling it gave me – both an overwhelming     sadness and a determination that I would make sure she wouldalways be remembered by writing her story as a children’s picture book. Myquest was to introduce Queenie to a new generation of children and to stir thememories of all those older people who were privileged to have ridden in ahowdah on her back in the days when zoos’ the world over, offered elephantrides.”
The story is beautifully recreatedin the sepia-coloured-inspired illustrations by Peter Gouldthorpe.
And yes there was tear in my eye atthe end of the tale.
Recommended for all ages!
Sharon Greenaway.

2 thoughts on “Queenie. One Elephant’s Story.”