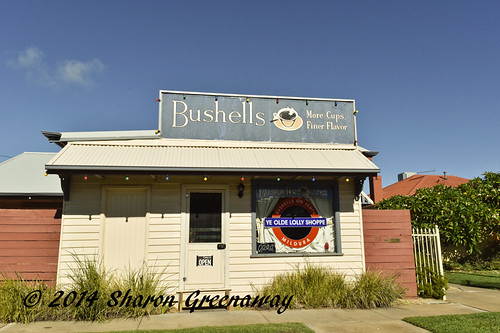 Last weekend when Bill and I were in Mildura to install Imagining Mum we saw an ad on the telly about a shop that featured a Bushells tea logo.

As we are photographing many things tea related we thought we would go and investigate.

Bill parked the car while I walked up and discovered that the freshly painted shop looked like it could have once served the nearby school as the local milk bar.

Upon entering I couldn’t help but hear two women chatting joyfully about their purchases from the eclectic mix of sweet things crammed onto lots of shelves within the small shop. Above our heads an original 1920’s toy cycled back and forth on a wire to the tune of the theme song from the Munsters TV show.

Part owner Ingrid Medova explained to me that the shop had only been re-opened four weeks ago and there were already plans to extend the internal wall in order to cater for the queues of people who visit the shop. 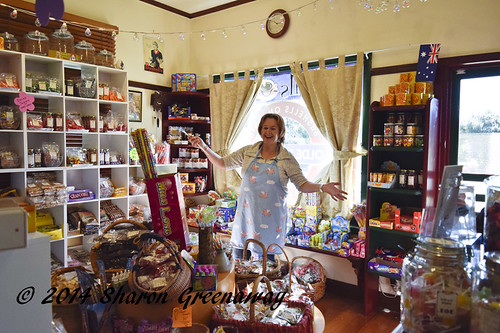 There is a strong history belonging to the shop: once it was one of many tea shops catering to the Mildura residents but is now the last of its kind.

Ingrid told me that the previous owner Ma Dell was renowned to being ‘quite a character’ and ran the store providing all sorts of provisions as well as lollies during the 1950s and through to 1966.

The shop was renovated and boarded up over time, but when Ingrid Medova and Peter Allen bought the shop in September last year it was decided after much deliberation to bring it back to its former glory as a supplier of lollies.

There is a tremendous feel to the place and it is well worth a visit or two for locals and visitors alike.

I admit to taking away some goodies for the 6 hour drive home that day!