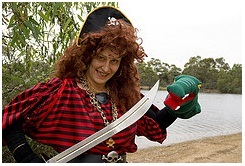 Grrr and Shiver me Timbers it’s Pirate Peg.
After an hour of entertaining children at a local pre-school by playing games and telling stories about life as a pirate and then finally having the children walk the plank in order to earn a piece of ‘gold’, Pirate Peg was still full of life when I met her yesterday.
Pirate Peg (aka Narelle Stone Story Teller) includes various costumes and characters as she immerses herself into the characters she reads about in her story telling business – ‘Quirky Tales.’
Narelle’s foray into performing children’s stories began when Tammy Higgs, Manager of Children’s and Family Services at the Bendigo Library invited her along to a story time she was running with a North American Indian theme. “Tammy knew I was an amateur actor and thought it would add another dimension to the session if I appeared as a costumed character “White Cloud” to entertain the children,” explains Narelle. “I enjoyed it immensely and volunteered my time freely thereafter whenever I could until starting my own part-time story time business, Quirky Tales, two years ago.
“I usually perform during Children’s Book Week (August) for the Public Library and choose stories short-listed in the Early Childhood and Picture Book sections of the Children’s Book Council of Australia’s Book Awards that I find particularly entertaining, amusing or noteworthy. I love Aaron Blabey’s picture books – ‘Sunday Chutney’ and ‘Pearl Barley and Charlie Parsley’. On National Simultaneous Story time Day (September) I perform whichever story is chosen to be read nationwide at that time.
“I usually read one or more stories to children during my regular story time sessions, often in character. I choose stories that relate to the theme, have been recommended or have a good message. I like to read dramatically, varying the voices that I use and adding sounds, where possible. I also try to engage the children throughout the reading of the story by asking questions or prompting responses from them.
“I mainly conduct story time sessions at kindergartens and libraries but I have also worked for a few Primary Schools, Community Groups, Neighbourhood Houses, one specialist school and am now a regular performer at the Elmore Field Days. “My audience usually ranges in age from 3 – 7 years, although I have a few babies and toddlers at a Playhouse where I attend regularly. I try to pitch a few puns at any adults who are present too so they feel a part of it.
“While…I can’t sew…I have some very talented friends who can and have made me some great costumes including a beautiful sparkling blue mermaid tail and a rainbow coloured fairy dress. I do, however, make many of my own props.
“I incorporate puppets into my story time sessions whenever I can as I really enjoy bringing them to life. I own lots of hand and finger puppets including a very realistic and adorable koala puppet, a feisty brown hen puppet (Henrietta) and a large dinosaur puppet (T-Rex) with moveable eyes, sharp teeth and claws which the kids just love. I recently bought a gorgeous brown, bear puppet to add to my collection.
“I’m not a teacher but…my sessions are instructive and include messages about looking after the environment. I prepare lesson plans for each session and evaluate them using feedback from my clients. I’m a qualified Librarian and an amateur actress with a good many years of experience in local theatrical productions. Narelle loves the reaction she gets from children to a character or story she is reading.
“I unashamedly enjoy being the centre of attention and making people laugh and it is especially rewarding when a child who is at first a little hesitant or frightened by the appearance of a larger than life character like Pirate Peg doesn’t want me to leave by the end of the session. It is a constant delight to me that children are still willing to believe in pirates, fairies and mermaids. I also enjoy exploring books with children and encouraging literacy. Narelle admits that the worst part about her job is the fact that she is her own worst critic. “I’m forever analysing and critiquing my own performance and I can be quite hard on myself when I feel I haven’t performed as well as I might. Older children who heckle can also be a worry to any children’s entertainer but fortunately, that doesn’t happen very often. Narelle performs her story telling sessions within an hour and a half travelling time from Bendigo. So far she has to Woodend, Gisborne, Maryborough, Avoca, Epsom and Echuca.
“I believe it is really important to give smaller, regional communities access to this type of children’s entertainment,” she adds. Narelle usually works alone, although coming up to Christmas she will “enlist the help of a very talented fellow amateur actor at Christmas who plays a convincing Santa to my Jingle, the naughty elf.”
Judging by the reaction Pirate Peg received yesterday from the preschool students, she will be busy sailing the story telling seas for a long time to come.
(I interviewed Narelle in November 2009. )