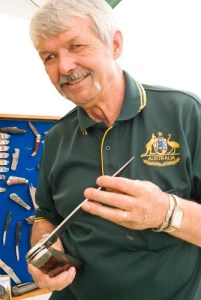 John Oakes has been passionate about collecting knives ever since he was aged about 6 or 7.

John explains, “… [It was] much against my mother’s better judgement…my first one was a …very small pocket knife probably only 50mm. when opened. [At that time] near enough all men and most boys would always have a pocket knife, [it was ] considered a necessity, and used often during the day, sharpening a pencil, cutting string, opening a letter or cardboard box, peeling and cutting an apple etc.” more: